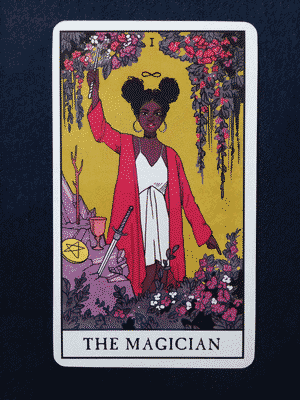 The history of the Magician is a telling one: originally "the bateleur" or "juggler", this card was ranked higher than the fool but below everything else. When the tarot became occult, it took on a more dignified stature as "the magician". With each of the suits sitting within their reach, I've seen the Magician interpreted as a sign of mastery, "holding all the tools", and certainly their posture indicates a stature of assuredness.

The Magician straddles the line between stage performer and occult sorcerer, at once a liar and a sage. It's hard for me to read this as being anything but the tarot itself. The tarot's mundane origins conflict with its newer occult traditions, the cards themselves are nothing but paper and ink but hold the power to knock someone out of their own perspective. Look this way and the tarot is a con-man and look that way it is is a mystical truth, and if you cross your eyes a bit you can see how both of these can be true. In a sly act of generosity, the magician blindfolds, misleads, and tricks you into believing in magic.