Swords are the suit of action (and inaction), intellect, and the consequences thereof.

The narrative of the swords tells of a struggle, followed by a departure, regret, and a bloody end.

I see the two of swords as being a position of conflict which has become a status quo. It’s specifically a conflict in the domain of action and not will, so it represents in some way a choice yet unmade. 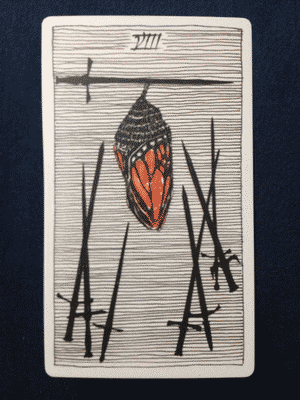 This card speaks to me of being trapped in a way that prevents growth. The butterfly cannot spread its wings without fear of cutting itself. When taken in the context of the suit of swords' intellectual domain, it takes shape as a way of seeing or imagining the world that constructs a prison without escape. Relatable.

The problem here might be inaction. Growing often requires taking a real risk of suffering, and sitting around waiting for the swords to go away isn't going to accomplish anything. At the same time, maybe it's a question of perspective: that by stepping out of sword-logic the path forward isn't so dangerous after all.

I see the Rider-Waite nine of swords as representing regret, grief, or experiencing the consequences of your actions. The Wild Unknown’s interpretation doesn’t quite convey this? The art is abstract, a formless mass, a claw, torn-out eyes and many worms.

The position of this card as the penultimate step of the narrative emphases the suit of swords nature as a warning: continue onwards is you must (and you so often must!), but know that your actions can have terrible consequences.